My goodness, what a happy “old” year it was! Stocks were up sharply both here and abroad, real estate and commodity securities turned in soundly positive numbers, even bonds had a positive (albeit modest) year. This was one of those years when the markets were really hitting on all cylinders and we’re sure you have already noticed the growth on your portfolio statements.

Is the party over? As always it is hard to say, although it is worth noting that the rise across markets wasn’t necessarily a case of euphoria (OK, perhaps just a little) but rather the markets recognizing both the level of current earnings and factoring in potential increases in earnings growth due to the provisions of the recently passed tax act, specifically the cutting of corporate taxes. That reduction in taxation should, all things being equal, tend to drop to the bottom line for companies across the country.

It hasn’t hurt at all that this has occurred within the context of a “rising tide” around the world with most of the world’s major economies all growing at the same time. With better news and expanding economies from Europe to China (and in between), a virtuous cycle has been created, enhancing economic activity around the globe. 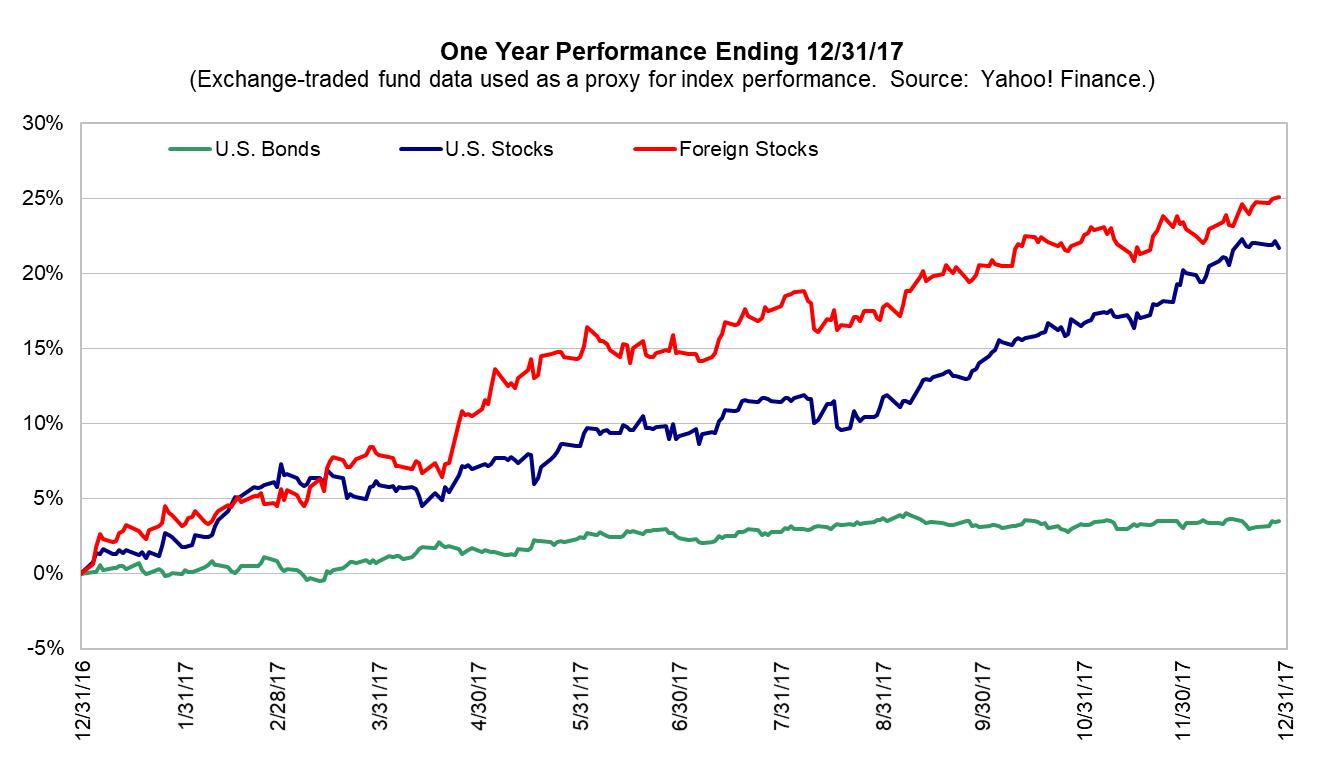 I thought it might be a good idea to take a couple of pages to give you a blow-by-blow of the major asset classes in your portfolio; what they have done, what we anticipate going forward and how we have approached each. Whether you are a long-time client or a recent addition to our extended client family, we hope you will find this helpful.

U.S. Bonds
Despite continued calls for interest rates to increase, along with the Federal Reserve raising rates three times in 2017, longer term rates declined several times during the year along with low inflation expectations before recovering to levels near where they began—with the bellwether 10-year treasury beginning and ending the year right around 2.4%, despite moving in a range from 2.1-2.6% throughout the year.

We’ve maintained an emphasis on corporate versus government bonds in your portfolio but the complexion of those corporate holdings changed as the year progressed. The biggest changes were in “junk” or high yielding/lower quality bonds. We’ve had a good run with those since their bargain basement status back in late ’08 but all good things must come to an end and their valuations indicated it was time to sell. The bank loan bond segment remains as a protection against higher rates and for their attractive yields and we continue to emphasize high quality short maturity debt to balance out that part of your portfolio.

Foreign Bonds
Foreign bonds had a pretty good year, helped by a falling dollar which made international investments of all kinds more profitable. At least in regard to developed market debt this currency change provided the vast bulk of the returns as the yields of the bonds themselves are quite small. We further diversified in this part of your portfolio last year which helped temper some volatility and enhance returns, especially near year end.

U.S. Stocks
It was a wonderful year for large US stocks. Earnings continued to grow each quarter and that helped propel the market indices to new records throughout the year. Technology holdings and other growth areas had oversized returns but most sectors ended the year with substantial gains.

The stocks of medium and small companies mirrored their larger cousins although in those asset classes it was a tale of two markets, with growth sectors shooting the moon and value companies much more muted. As such our continued overweight to large companies paid off last year as those positions did better throughout.

We did take a step back from growth earlier in the year, selling some of the higher flying growth companies and buying some more conservative parts of the market. We think this tempering will bear fruit in the future when market volatility makes its inevitable return to the markets.

Foreign Stocks
It was an outstanding year to have international exposure, earnings grew as the global economy quickened and values were propelled higher by the dollar’s decline. Pat yourself on the back if you were one of the stalwart that maintained international exposure through a lackluster several years of underperformance. We’re delighted to see robust returns in this part of the portfolio and are still convinced that international exposure will provide needed diversification, both from a risk reduction and return standpoint, in the years ahead.

Real Estate
It was a good year to be a real estate investor here in the U.S. but even better to participate in those markets overseas. We have both sides of the ocean represented in your portfolio and while the US real estate stocks had more modest returns their international sisters turned in an outstanding performance.

U.S. real estate provided positive returns during the year, although the group lagged the broader equity market significantly, due to lower growth rates and fears of higher interest rates to some extent.  The global component benefitted from a weaker dollar, as well as stronger sentiment and improvement in growth prospects in Europe and Asia.

Commodities
Commodity holdings in the portfolio provided double-digit returns, lagging those of equities, but outperforming the more tempered result of the broader commodity index benchmark.  A portion of this was due to higher weightings to metals, which performed well during the year, as well as active management of futures positions

Outlook
Over the last several quarters and in our meetings throughout the past couple of years we have cautioned that sooner or later we’ll have a more significant sell-off in stocks. This is the place where we remind you that no one knows just when that will come!

With this bull market well on its way to its 9th birthday it is the 2nd longest bull on the books. But markets either end in a speculative frenzy of overvaluation or drop in anticipation of an economic downturn. Neither of those seems to be the case today. That said, market corrections are a normal part of market activity and we would be awfully surprised if we don’t see one of those in 2018. It is easy to forget but we have had 16 corrections in the market since this bull began running back in the spring of 2009.

It is important to remember that diversification is the key to managing market volatility, although, having said that repeatedly over the last couple of decades we suspect we’re preaching to the choir. No one knows just what sort of wild card might be dealt over the coming year and to try and guess the unknowable seems a bit of a futile exercise. Nonetheless there are some clues. The economy continues to grow (albeit slowly) and the tax cuts ought to be supportive of that over the near term. Corporate profits continue to grow. There really aren’t any clear signs of recession on the horizon as yet although the yield curve (the difference between short and longer interest rates) has flattened a bit over the last couple of months.

As such we hope for the best and prepare for the worst. We diversify and make sure we don’t have all our eggs in too few of baskets. We pay attention to market valuations and follow our discipline of emphasizing asset classes that are less expensive and backing away from those that are too dear. That, in our minds, continues to be the most sensible method of controlling the inevitable market gyrations that have been so absent of late. We’ll continue to apply this sort of time tested approach on your behalf.

We wish the very best for you and your family in 2017, and we want to thank you for your trust in us and for your business.

It’s an honor to serve you.

Be at war with your vices, at peace with your neighbors, and let every new year find you a better person.  – Benjamin Franklin